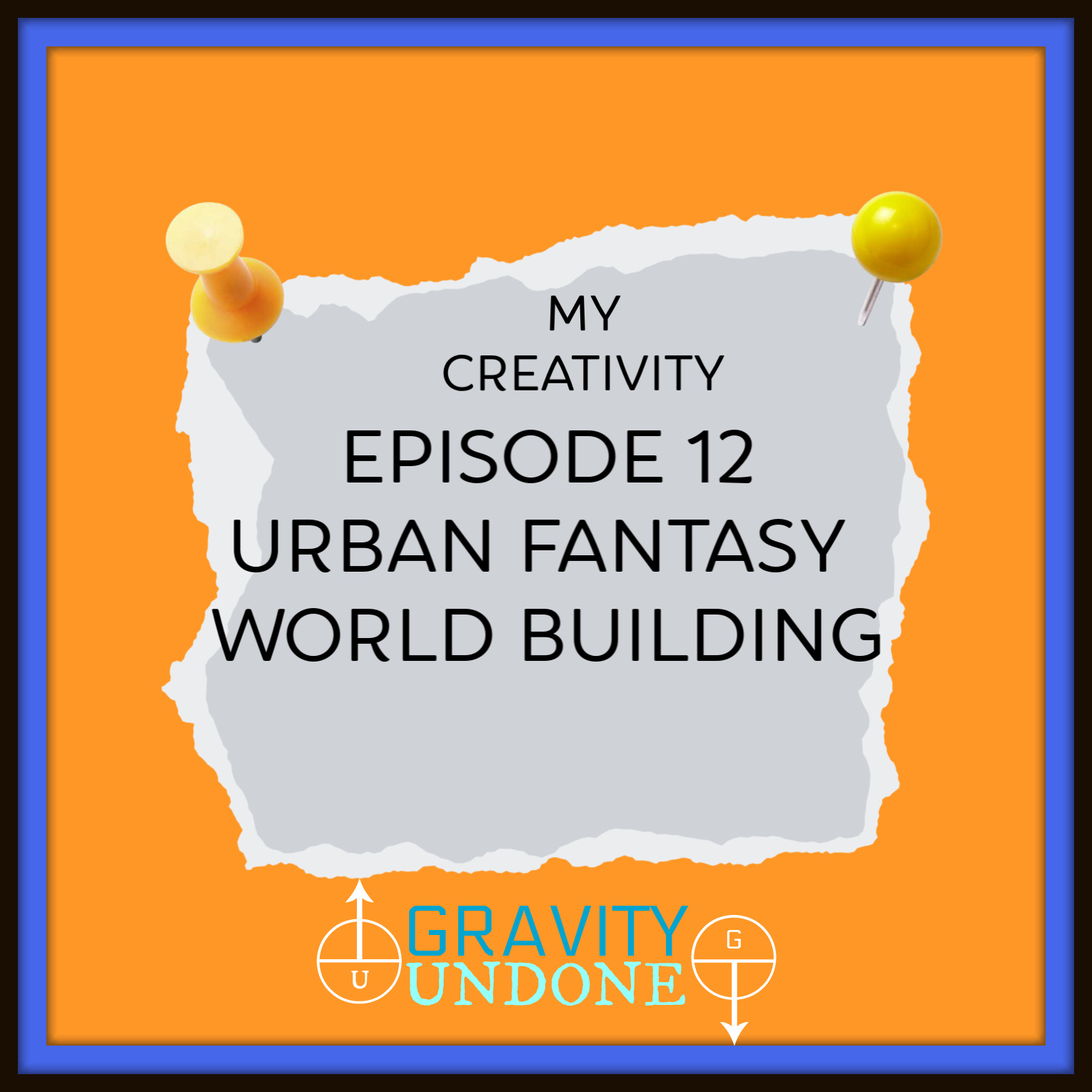 Intro:
Hi, welcome to My Creativity – the podcast about being creative and producing output. I’m your host Surrey
I reveal how I work, my projects, my process… well, my creativity. From the planning and goal setting, to how I stay accountable for my output, to the way ideas pop into my head and to the frameworks I use to stimulate my creativity and formalise it.

Purpose:
Create a collaborative entertainment network of creators of wonderful stories supported by patrons, not ads.

June Goals:
– Each week review monthly goals.
– Shop complete
– each category have at least one item for each IP
– run up to 10km on sunday
– finish book 2
– start exit plan 3
– record cover of judgement day

The 5 Key Steps Every Urban Fantasy Author must know
Create imaginative and engaging urban fantasy stories by using these 5 key steps to craft your world.

Because you have fantastic stories burning in your soul that you need to express I have created this easy to follow framework. Sometimes the ideas just vent from your heart like fresh blood but other times they are as elusive as dragon’s teeth. By following these five steps you will generate deep fantastic elements that are integrated into your world and the organisations that work with or against those elements. You will develop characters that interact with and rely on your world and you will build conflict that evades cliche and provides excitement.

In an urban fantasy it is common for entire story arcs to revolve around the actions and agenda of one or more organisations. Why? Because that’s how we’ve organised our modern world and this fantasy is set in a reasonably modern world. It is also important to know what these organisations are and what they want because as your characters take action and as conflict rolls into the world people will notice. If secrecy is maintained by pact then any supernatural activity will attract the attention of the peace keepers, if it is in the open then magic use will likely require some kind of licence. Flesh out these organisations and their goals and power and most of your story will be written for you.

4. Create your characters
Characters are where the story is. They are the vehicle through which your audience interacts with your world and they cause and react to conflict. In many stories the characters are the story though in urban fantasy you’d have to include the city and the magic as characters in that case. However you look at it there are four characters you need in your urban fantasy. They could each be an individual giving you exactly four characters or you could have more or less individuals representing each of the four required characters. The characers you need:
a. sane: A world of magic and supernatural beings can be a little more than the audience can handle at times. The sane character is your grounded and rational character. They could be the one in a scarce world who continues acting on the rational and scientific or they could be the one to fully embrace the supernatural in a more open magic world. The point is they do and act like you’d expect a sensible person to act like in the context they are in. They will be the one to point out logical failures, follow clues in a rational and resonable way and talk to people without freaking out. The sane character could be the local news that plays at the start of each chapter, they could be a faithful hound, a police detective or a group of children. Use your imagination and find a way to include a little sanity in your story.
b. insane: The insane character is the one who refuses to believe in magic even in the face of obvious witch craft. They seek to cling to the familiar regardless or they are the character who leaps to the supernatural conclusion each time. Whether they are right or wrong the point of the insane character is to introduce to your audience the many and varied possiblities the world can offer. They will try to do the same thing over and over but expect different results and they will demonstrate the easy or hard way to interact with the world. Whatever they do it will be counter to what the audience would think or try. This character could be the willfully naive reporter, enthusastic sidekick, a witch’s familiar or a spirit from another dimension for example.
c. good: There will be darkness in your urban landscape. It is inevitable that when we imagine our present world with magic and monsters that it will darken; there are just so many more evil monsters and applications of magic than good. The good character resists the corruption and shines like a beacon in the endless night of a city ruled by vampires. They could be your protagonist but they could equally be the waitress at the local deli who refuses to buckle under the oppressive darkness of a world gripped by magic and death. It might be easy to combine the insane character with the good or play them off each other.
d. evil: This character is the opposite of the good one. They will accept the evils of the world as inevitable and may even perpetrate some of them. The evil character sees anti-social behaviour as just a required lifestyle, it is an adaptation to the environment they find themselves in. The evil character may not necessarily be evil themselves. In fact they could have a good agenda, trying to save people, but they use methods that play to the dark side and accept that darkness is part of life. There are many protagonist characters who play in the evil character role. They are the anti-hero, the one who saves the day but their means are in alignment with their world view. Nothing is so simple in an urban fantasy as straight up good and evil. This character must demonstrate that.

5. Theme
The theme reveals the blood and guts of your story and it should naturally arise from the characters, organisations and magic of your world. Urban fantasy is a grittier and more grounded fantasy genre than epic fantasy so leave your classic story of good versus evil in the trash that’s fallen out of the overfilled skip behind the dive bar and dig deeper. Clear cut good and evil don’t exist in the real world; they exist on a continuum with most things falling in the gray middle area. Pick one of these variations:
a. change vs stagnation: The modern world marches forward in technological progress while magic and the supernatural lags behind. Or magic is a dynamic changing force breaking the stagnant crust of the technolgoical world. Do your characters strive to stop a major change or do they seek to bring about change. Is change a destructive force that will break your world down into what amounts to a gray sludge destoyring the scaffold that holds everything together or is change the evolution that leads toward enlightenment? A change versus stagnation story could be about a revolution, the rise of an institution, the romantic break up of two lovers or the welding of hearts into a single soul.
b. redemption: We’ve all done things we regret. In a world of magic, myth and monsters the opportunity to do regretful things is enhanced but so to then is the ability for a person to be redeemed. Redemption is a powerful drive and a great source of drama and conflict. Redemption doesn’t need to be a good thing and it doesn’t need to be an evil thing. The victorious write history anyway.
c. love vs fear: Fear makes people defend themselves, it drives people to hate and destroy. It also drives people to hide and wear a masquerade keeping the world from seeing who they really are and stopping them from seeing themselves for who they are. Love is an attractive force that draws people together and inspires acts of great courage and compassion. A story of love versus fear is the story of the man leaving the cave to enter the night with his torch held high to find a world filled with others leaving their own caves to meet. It is also the story of the group tearing itself apart from the fear of betrayal or change. On another scale it is the story of the friends seeking to bring their warring families together to make peace or it is the opposite, it is the story of the friends afraid of what peace between their families will bring trying to break them apart.
There are countless other themes but these three are the power houses that drive most stories. Choose just one and run with it but don’t just skim the surface. Add layers and twists. Complicate matters by intertwining character’s agendas and motives. Is the revolution seeking to break a stagnant and dying world order or is it really looking to bring an end to progressive social policy? People rarely if ever act out of pure emotion or virtue there is always an undercurrent of self interest. It may be that self interest aligns with their stated goals but often the self interest isn’t even recognised. Every theme should have at least three layers to it. Make your story tug back and forth.